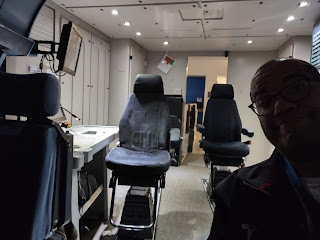 I am truly enjoying the Airbus. This is the first aircraft that I truly enjoy being on the flight deck. The Airbus flight deck is spacious and almost perfectly thought out. I appreciate how quiet it is and the room to stretch and spread out.

My trips have been all over the place. I have enjoyed a double overnight in Portland (I have family near by), 24 hours in St. Lucia (at an all inclusive resort!) and of course many...many...many trips to Bogota, Colombia.

My first recurrent training is coming up next week. I began studying 2 months ago....because that's who I am.

I haven't flown the NEO yet. I was assigned a LAX turn...but it cancelled 2 hours before departure. The NEO has fancy CPDLC (Controller Pilot data Link Communications)boxes and of course new engines. The CPDLC makes flying out of RADAR coverage more pleasant among other things. Right now when traveling over the Atlantic between the Caribeaan and parts of the Eastern US we use High Frequency radios for communication. The HF radios aren't clear and we are talking to radio operators and not controllers. CPDLC is like text messaging between controllers and pilots. I look forward to using it one day.

Beyond that life is great. My 2 year old is still giving me grey hairs. My 9 year old is itching to take another International Business class flight. My wife is finally enjoying the extra income I'm bring home. Long time followers know she supported me for years when I was a regional First Officer making under $40 an hour.

I plan on riding out the Airbus until I can hold the 787 right seat. At least 2 more years. Which is fine with me.
at 5:19 PM No comments: