I'm still here. I've settled in nicely into the right seat of the MD-80. So far I've flown just under 200 hours in the Mad Dog. I'm almost comfortable.

Being able to be based at my home airport was very lucky on my part. I've enjoyed a lot more time at home and days off not being called.

The MD-80 is a very small fleet at my airline. In the fall it will be very small. As of now there's no plans to displace any pilots in my current status. I will stay as long as I can as I can't hold any other aircraft in my base.

Hopefully by next year I will be able to hold something local...if not I should be a line holder in another base. As of now I hope to hold the Airbus....but will settle for the 737.
at 8:54 AM 2 comments:

I finished my consolidation for my new aircraft at American. The FAA requires pilots to accumulate 100 hours of flight time within 120 days of earning a type rating. It's not hard for narrow body pilots, for wide body pilots it can be an issue as they might be at the controls for 6 hours of a 14 hour flight.

After 100 hours I finally feel comfortablish in the MD-80. It's a very different aircraft than I most recently flew at my last airline.

The last aircraft was a nearly fully automated glass flight deck that required very little input once programmed. The MD-80 requires a lot more attention....but I enjoy it.

Through my first 100 hours I've flown to exactly one new airport. Ironically everywhere the MD-80 flies is where I used to fly when flying for American Eagle. It's fine...at least I know the airports.

I'm still getting used to the idea that I will never have to interview at another airline...or anywhere for the rest of my career....possibly 24 more years if I work until 65. 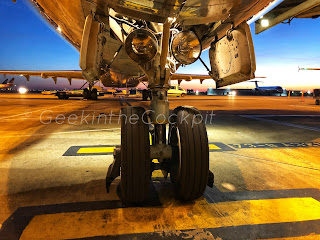 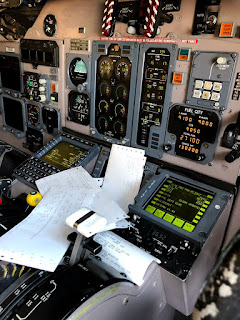 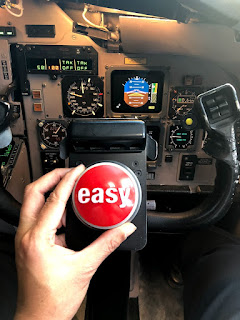 Just finished my first IOE trip. First...the plane is waaaay easier to land than the simulator. Of my 8 landings, 7 were very smooth. The one that wasn't was just me being new. It wasn't rough, but I flared late and it was a little more wobbly than I would have liked.

My trip was a 3-0-4-3. I overnighted in OKC and PNS. At my last airline I only got a meal if there were leftovers...and since we had no ovens they were always cold. At AA pilots get meals loaded for them. It's a whole new world. Being given a hot meal on the same route I flew at my regional is just weird.

The MD-80 is a very busy plane...especially for the First Officer. Between the gate and runway there's a lot to do and fine tune. I am keeping up though.

I hope to keep the blogging up now that I have something new in my world. I was honestly very burnt out even as Captain at my regional. It wasn't a nice environment for me.
at 3:56 PM No comments:

All was well at FL340 over southern Arkansas. I was flying the leg between MEM and DFW. While talking with the Captain a yellow beam of light interrupted our conversation...the right starter valve was open....and it wasn't supposed to be.

No idea why it was open. I called for the checklist. The end result was the engine had to be run at idle and the auto-throttles had to be disconnected...along with an emergency declared.

We tried to find somewhere to divert to...but wouldn't ya know it...every airport east of DFW was 1/4 SM and fog. DFW it was.

Cleared direct to the airport. I made a very nice single engine approach to runway 17 center. Once on the ground the Airport Fire Department verified all was well with the heat coming off the right engine. We shut it down and headed to the gate.

Once parked the Captain shook my hand...."Great job....definitely above average...welcome aboard." I was officially a DC-9 First Officer for American Airlines. The simulator instructor also shook my hand and welcomed me aboard.

The training wasn't easy. For the last 10 years I have flown ONLY fully glass flight decks. Nothing else. The MD-80 at AA has VERY limited glass. The Altimeter, Airspeed, VSI, VOR/ADF are analog dials. The PFD and a Navigation Display are glass...that's it. Every other gauge is analog. There's no EICAS...just a systems panel. Very different. I haven't flown steam gauges in more than 10 years...thankfully I have flown enough that a jet is a jet....it just required me to look in more places for the information.

The last 24 months has been a rollercoaster. January 2016 I upgraded from First Officer of the ERJ-145 to Captain of the CRJ destined to commute to Chicago. February 2016 my wife suffered an Ectopic pregnancy and had one of her two tubes removed. March 2016 I was awarded Captain 175 DFW. Great. June 2016 while on an overnight I was told my father passed away (you didn't miss anything...never made it public). September 2016 when I was getting ready for training on the 175 , my wife called stating her pregnancy might be ectopic again and this pregnancy might be our 4th and final loss. I flew home from St Louis to be with her...and had to go back not knowing the status. I finished training a few weeks later...pregnancy still in limbo. Thankfully in April 2017 we became parents to a healthy baby girl. I interviewed with American Airlines in June 2017..and was given the amazing news in August 2017 that I was hired. Today....January 24, 2018 I passed my 3rd long term training event in 2 years.  I won't get to fly it for long as it leaves service next year...at which time I will likely head to the 737. For now...it will be nice to breathe...and relax. While I was the one sitting in the seat for the check ride...none of this would be possible if not for my wife. She's an amazingly intelligent, strong, determined, sometimes annoying to the point I swear she's crazy, beautiful woman that is always up for the challenge that is being married to me....
at 5:54 PM 2 comments: