Save The Mad Dog 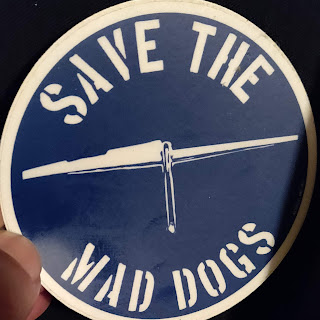 As of 1PM yesterday I'm no longer on the MD-80 reserve list for the month. I start training next week on the Airbus.

I was on short call on reserve all month. I was only called once for what was supposed to be one leg to YYZ, short overnight and dead head home. Easy. Ha.

The original crew timed out due to an EDCT issued by YYZ due to weather. There was heavy snow and high winds all day long.

I was called around 5:30 PM Friday for a 7:35 PM report time for a 8:35 PM departure. Being a short time frame I was given approval for terminal parking. This means I can park in covered parking feet from the terminal that normally cost $24 a day....with my airline picking up the tab. Nice.

After clearing KCM I made my way to the gate only to be greeted by a 9:00 PM departure. Ugh.

Unbeknownst to me I completed my last MD-80 pre-flight. I set up the flight deck and waited for the Captain. He arrived with just a back pack. He is very senior and picked up the overnight on over time. I mentioned he was brave as the weather was crap, overnight short and we could easily be stuck for over a day.

We boarded up and pushed out at 8:55 PM. After a little congestion on the ramp we left gate C20 and were told "Runway 36R Bridge". Many airports use coded routes to minimize radio congestion. Being based in DFW I know most of them by heart....from the WEST side of the airport where I flew for American Eagle for 10 years. Thankfully the east side routes are similar.

The Captain taxied down Kilo to Bravo and headed west on Bravo. This entire time I'm finishing my taxi flow and waiting for the printer to spit out our final numbers. I called operations in an attempt to get them to send them over. No answer.

On top of the Bravo bridge I called the west side ground controller. We were assigned Golf Whiskey Quebec. I advised ground that we were still waiting on our numbers. We were then assigned Whiskey Romeo. This worked fine as we had 20 minutes left for our wheels up time for the EDCT.

Another call to operations and they answered. They stated we had to pull a bag as one passenger didn't board the flight. Being an international flight all bags must be matched to a passenger on board. Back to the gate. We would miss our wheels up time.

Ground assigned us north on Foxtrot to Yankee to get back to our gate. Yep...we did a full tour of DFW airport. 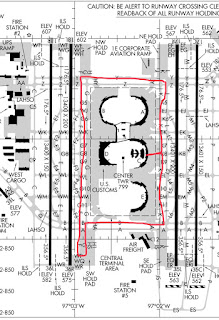 We were assigned the same gate. Thankfully they pulled the bag quickly. The small delay was costly though. The delay meant we would be illegal for our scheduled deadhead as we would have less than 10 hours of rest. Being a Saturday that was the only flight of the day back to DFW. We were assigned a deadhead Sunday morning instead. A weekend in Toronto!

After pulling the bag we were given runway 35L via Kilo and Echo Quebec. Much easier routing. I reprogrammed the FMS, the final numbers printed and we finished the checklist.

The Captain gave me the leg up to Toronto and I was happy to fly it. Smooth takeoff and away we went.

Being late we got direct routing and I flew at .78 MACH instead of planned .75 MACH.

The weather in Toronto had not improved at all. Winds were still gusting to 34 knots out of the west with snow. For whatever reason Toronto doesn't like using the east/west runways and prefers the 3 southern runways. Crosswinds.

The Captain had only met me hours before. We had not flown together before this trip. He knew I was fairly new and thus opted to take the landing.

It kinda bummed me out, but I would do the same with the conditions (night landing, gusting crosswind and snow) if I were Captain with a low time First Officer I had just met.

He made a very nice landing and we pulled into the gate at 1:00 AM eastern. We contacted scheduling and opted to waive our rest requirements to take the original deadhead at 11:45AM. Ironically it was on my previous airline and aircraft...the Embraer 175.

We can waive our rest for ourselves but the computer must show legal rest. That meant the computer and our schedules showing us staying until Sunday. We would get 15 hours 45 minutes worth of credit instead of the planned 10 hours 30 minutes. I was on reserve so it was just credit (that later helped me not get called for the rest of the month due to the way reserve works here). The Captain was on overtime so for him it was an extra $1500+.  All because of a passenger that didn't board the plane with their checked a bag.

The hotel van arrived late and I walked into my hotel room at 2:05 AM. I'm an early riser and woke up early at 7:30 AM. Quick breakfast at McDonalds across the street (What's up with Canadians putting mayo on breakfast sandwiches?) and I met the Captain for the off schedule 10:45 AM van. Yeah the van didn't show. I called them and they didn't get the memo. Cab it was.

I scored a first class seat home. The Captain looked familiar while the First Officer was fairly new. Toronto to DFW is a long flight and I napped a good amount. I do enjoy dozing for dollars.

By 3PM central I was home on a Saturday with my family.

That was my last trip on the MD-80. For the rest of the month I was on call but never called for an assignment.

That gave me ample time to finish up my Airbus training and start on the flows.

I will miss the MD-80....but am looking forward to something different.