I'm still here. Tiktok has been my primary blogging platform of sorts. It takes WAY more time than this site....but it's a visual experience vs words and a few photos.

Those not in the industry assume everyone wants to be Captain and make money. I am and have always put quality of life over money. Being at mainline I make plenty as a First Officer. No need to rush to Captain. I will likely head over to the 787 as a First Officer before bidding Airbus Captain anyway.

Beyond that...I'm happy. I am doing what I love. My goal was to one day be an airline pilot for a major airline. I have met my goal.

The road here wasn't easy...but I am glad I took the jump.

At the end of the month I will mark 14 years as an Airline Pilot. This career has been interesting. I've lost count of how many hotel rooms I've stayed in....how many cups of airplane coffee I've slugged down....how "well crap" statements after a not so great landing.

I still love what I do.

Each time I pre-flight a plane I look up in amazement....."I get to fly this thing".

That said it hasn't all been roses.

Long time readers know I spent 10 years flying regional jets...8 1/2 of those years in the right seat...unable to upgrade.

This blog used to be my main focus. As time has gone on I updated less and less....over the last year I've been making more updates...but just via video on TikTok. I'd like to say that will change...but I don't see it.

I will be starting a YouTube channel. It will be updated more than this site but less than Tiktok. Just a different avenue. 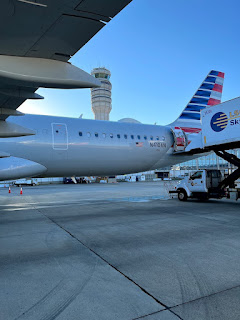 The last year has been interesting. Flights went from nearly empty to every seat being full.

I was fortunate to survive furlough and have steady flying the entire time. During the fall I was the second most junior pilot in my status. This summer…I’m 50% in base meaning half the pilots in my status are below me.

With the increase in flying I’ve scored a few 150% pay trips. These are the trips my wife and I would talk about while I was making $40 an hour as a RJ First Officer. One 150% pay overnight pays more than. I took home in a month my first year flying back in 2007. Even a regular pay 4 day pays more than I made in a month as a 8 year RJ First Officer. I am lucky to be where I am.

While planes are full, I am not doing to same flying I used to do. I miss Colombia and Ecuador. My Bogota flights from DFW are now flown by a 777. No flights to Ecuador have returned yet.

This Thursday I fly to Honduras for the first time since 2019. Toncontín airport in Tegucigalpa, Honduras is one of the most difficult airports to land at in the world. There’s a lot of prepartation prior to landing. I’m looking forward to a change of scenery.

Beyond that…life is good. Kids are healthy. Wife and I are vaccinated. Waiting for the world to recover.

Back to the Line

After surviving furlough by 27 numbers I'm back to being a line holder next month. I didn't want a line....I wanted reserve. Why ? Numbers.

I was awarded a week of vacation next month over my kids Spring Break. Normally great...but the whole pandemic thing going on.

At my airline a week of vacation is worth slightly more than 25 hours. Due to the way reserve is calculated I can bid short call reserve and get almost 85 hours of pay while working 15 days. It's some convoluted math.

I tried to bid reserve but I put in to many restrictions and not enough options thus I got a line. I will be paid 82 hours with 20 days off though...not bad. I have 2 4 day trips and 1 2 day trip. I'm still ahead.

Of note my 2 day trip goes through Tegucigalpa Honduras....AKA one of the most difficult commercial airports to land at in the world. I haven't been there since...hmm....maybe last March. It's been a while.

Beyond that life is good enough. I could complain because all pilots complain...but I won't. I'm happy to have job...be based where I live and have enough to support my family.

Sorry for the inactivity here....I'm much more active over on the Tik that Toks. Link is here

With the furloughs and reduced flying I've gone from middle line holder to second from the bottom. Long time readers might recall when I was THE bottom back in 2008. I've been here before. Thankfully there's no more airport standby. I've been short call reserve for 3 months in a row.

December I was in the right spot all month...I only worked 5 days...and just 2 overnights.

I'm thankful to still have a job. I'm not complaining.

January I have a week of vacation. January vacations go very junior as it's not a very desirable vacation month. I have no plans.

I'm currently on a 4 day trip. This was a surprise trip as when I saw it go into open time the math showed I was barely legal for it. Turns out I was the ONLY pilot available. Thus I got it. I was legal by 13 minutes.

There were a few pre-boarding delays and it wasn't looking good for me getting out before I timed out. While finishing the pre-flight stuff and ACARS message printed out. 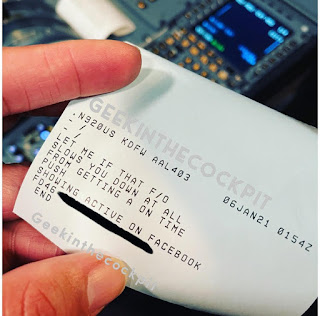 I was about to erupt before I saw it was from a friend of mine. He happened to be
the Dispatcher for my flight.
I pushed up the thrust levers with 8 minutes to spare.
Long flight to Pittsburgh. Airport hotel.
With this trip and my vacation  I should be done for the month.
February has the return of many pilots below me. I might be able to bid a line.
Hoping 2021 is going to be legen......wait for it....dary.

I worked 3 days in November

November began with a week vacation with my family at Disney World. This was our second trip there this year. We went in March the week before it shut down. Going back so soon was very interesting. Crowds were less but it was just different. My kids were happy.

With the furloughs and reductions in flying I am very junior in base. I'm on short call reserve. Since I live 10 miles from the airport...it's no big deal.

Scheduling didn't call me until the last half of the month. I was called initially for a super easy 2 day trip. I was to dead head to Grand Rapids...fly to Phoenix...stay the night...and dead head home. Well once we landed in Grand Rapids they changed my schedule for me to fly right back home...as crew. Fine with me.

The day before Thanksgiving I was given a very interesting trip. The morning flight from Lima, Peru to Miami had a mechanical. The plane was out of service. I was assigned to ferry a plane from DFW to Lima. There's no direct service between DFW and Lima. This would be a first. That flight was just over 2950 miles. That was my longest flight ever...just me and the Captain.

I did make a Tiktok about the experience....

For December I'm short call again......there's rumor of a new bill from Congress that would allow furloughs to be recalled. 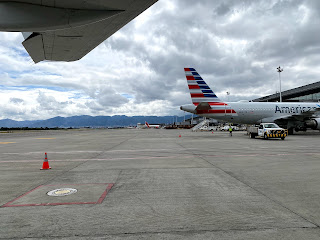